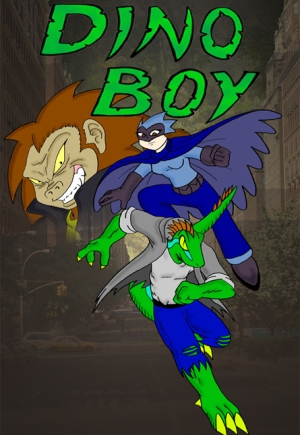 A webcomic series written by K.E. Detwiler. Formerly called The Adventures of Dino-Boy and The New Adventures of Dino-Boy, Detwiler eventually settled on the overall name Dino-Boy. Unlike most other webcomics, which have a daily updating storyline, Dino-Boy is published more like a comic book series, with a new "issue" out every other month or so.

The series revolves around the actions of Evan Nedelka, otherwise known as the superhero Dino-Boy (AKA the Dinosaur), a were-saurian who received his powers through an accident in the local natural history museum, and his younger sister, Halle Nedelka (hero name Blue Jay), a Badass Normal who wears an anti-gravity vest. The story started out with the young heroes in grade school, but a subsequent Time Skip now has the characters as young adults, attending college. While at first glance the series seems to be about Evan and Halle fighting crime, most stories feature an Aesop about life, the universe, and stuff like that.

The series itself can be found here