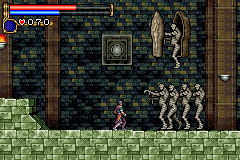 They're all mostly hot air is why.
Advertisement:

The tendency of a graveyard to create more zombies than it has plots, leading to the belief that the hapless heroes have wandered into the Rubber Noses Memorial Cemetery.

If it's a spawn point rather than a set number of enemies (inflated though it may be) then the only logical conclusion is that the cemetery's owner is leasing space to several despots for mass graves. Then again, any movie Zombie Apocalypse worth its braaaains will inevitably have zombies spawn in infinite numbers, so thematically it's dead on.

Note that this trope may be justifiable in settings a few centuries before modern times, as mass graves were more common in the past. Where burial space (graves, tombs) is at a premium, bodies may be buried only until they completely skeletonize — then the bones will be removed and stored in an ossuary (hence the Biblical expression "X died and was gathered to his fathers").

A subtrope of Rise from Your Grave. Compare Hammerspace, Mook Maker, Clown Car, Clown-Car Base.