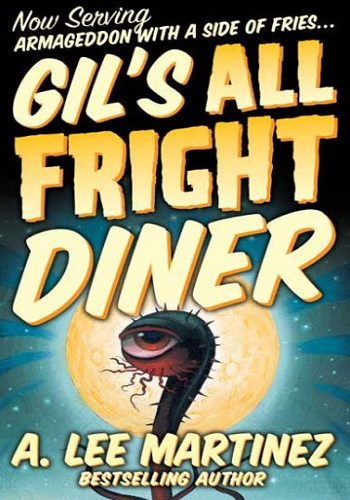 Gil's All Fright Diner is a 2005 comedic Urban Fantasy novel by A. Lee Martinez.
Advertisement:

A werewolf named Duke and a vampire named Earl run out of gas in the creepy desert town of Rockwood. Taking a break at a Greasy Spoon named Gil's All Night Diner, they discover that the place has become an inexplicable magnet for zombie attacks, and the owner Loretta is at her wits end to deal with them. After the two amicable monsters help repel the latest attack, she offers them a job tracking down the source of the problem (and doing a few other chores around the place as well).

This leads to a veritable Monster Mash of events, as in addition to the vampire, werewolf, and zombies, a witch, some ghouls, a couple of ghosts, The Old Gods, and a herd of undead cattle are all involved. But what is it about this diner that attracts such weirdness?