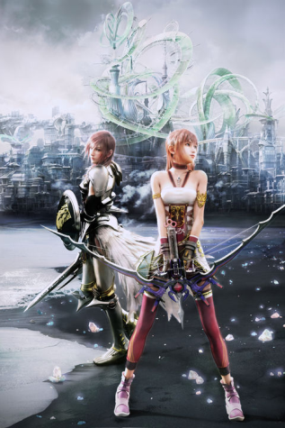 Lightning (left) Can Do Anything... but that doesn't mean Serah (right) isn't gonna try her part.
Time and Memory, frozen in crystal...

Final Fantasy XIII-2 is a direct sequel to the 13th game in the baby-blendingly popular Final Fantasy series and third entry of the Fabula Nova Crystallis: Final Fantasy sub-series, and also the fifth title in the series to be a direct sequel to a main series title. The game was teased on January 27, 2011 at the Square Enix 1st Production Department Premier Conference, and was subsequently released on December 15th, 2011 in Japan, January 31st, 2012 in North America, and February 3rd, 2012 in Europe. Like its predecessor, it is for both the PlayStation 3 and the Xbox 360. The game was also ported to the PC on December 11, 2014.

Three years after the end of Final Fantasy XIII, the residents of Cocoon are attempting to rebuild their lives following the loss of the Cocoon fal'Cie. Lightning is missing, assumed to have sacrificed herself in order to stop Cocoon from falling and killing everyone inside. Only one person believes otherwise: Serah Farron, who swears that her sister emerged alive but disappeared into thin air a moment later.

When a mysterious young man called Noel Kreiss drops into Serah's life and promises to take her to Lightning, Serah eagerly accepts this opportunity to discover the truth. Noel reveals that he is a Time Traveller, the last survivor of a ruined future sent to Set Right What Once Went Wrong. Using the Historia Crux gates to travel between the past, present and future of Gran Pulse and Cocoon, Serah and Noel must discover the source of the mysterious distortions that are tearing apart the walls between timelines, track down Lightning and confront an immortal antagonist from Noel's world.

All spoilers for Final Fantasy XIII are unmarked and all character tropes go on the proper character page.