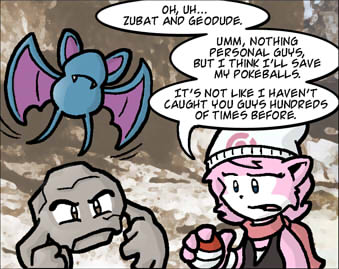 You can only see the Goddamned Bats so many times.
"Although weak and helpless, this Pokémon is incredibly fertile. They exist in such multitudes, you'll soon grow tired of seeing them."
— Pokédex Entry for Magikarp, Pokemon Sun
Advertisement:

The Mon/card for beginners. Common, that is. In Video Games, they show up early in large quantities, but quickly grow useless - unless some Magikarp Power is applied. Then with time and care, you can make some pretty powerful fighters out of them. In trading cards, the cards that are only good for tinder. They're basically the Mons equivalent of The Goomba.

Contrast Olympus Mons, which are very rare and very powerful.