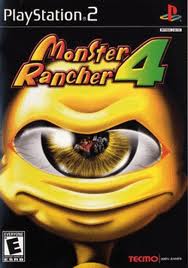 Take the Mons fad of the late Nineties and early Noughties. Throw it into a simulation/management game. Add an action-oriented battle system unlike just about anything else out there, a unique method of obtaining monsters, and some truly unforgiving gameplay. Put it all in a blender and press "puree." Season to taste with a few odd RPG elements, and you have the Monster Rancher series in a nutshell.

Monster Rancher (known as Monster Farm in Japan) is a console and handheld RPG franchise that combines the heart-pounding battling action and raiseable critters of a Mons series with the strategy and challenge of a simulation and management game. The premise of most games? You, the player, have recently become a "monster breeder"—someone who raises and trains monsters to fight. Monster battles are an extremely popular sport, and there's good money in raising strong monsters and winning lots of battles. You have a farm or ranch, and every week, you and your monster engage in activity. You can train them by putting them through exercise routines, go battle, and, occasionally, go on adventures to various regions. The ultimate goal? To Be a Master and win the ultimate cup of the game, whatever that may be. But nothing lasts forever, and eventually, your epic monster will grow old and die—you can either retire them, or "fuse" them into a new, baby monster and start again. Although a few games have deviated from the basic formula, in every Monster Rancher game, you'll find certain traits.

The series has gained some renown among gamers for its extremely unique means of obtaining monsters. Rather than running out and catching them or raising them to evolve into other creatures, you create monsters from ordinary CDs and DVDs. By reading "subcode data" off of CDs, games in the Monster Rancher franchise create monsters from pretty much any disc you can stuff into your PlayStation. Certain discs even unlock specific rare monsters, often ones that play off the content of the CD or DVD. The Updated Re-release of 1 and 2 emulate this method by a database of CD names that the player enters the name of instead of inserting. When the series progressed to the Game Boy Advance, it switched to using "passwords," combinations of letters and numbers. And when the series went to the Nintendo DS, it got three new methods of monster creation: Sound (by using the DS microphone), drawings (using the DS touchscreen), and, in a nod to the originals, by reading the data found on GBA carts in the DS's GBA slot.

Another thing about Monster Rancher games? They're hard. Really hard. This is partially due to their depth—despite looking fairly simple, there's a lot that goes on in the background. Due to the legendary difficulty and important mechanics not being told to the player, the series became a cult classic overseas, though it remains fairly popular in Japan. It also had an anime adaptation that ran from 1999-2001.

The first and the second game would be bundled together as Monster Rancher 1 & 2 DX and was released on Nintendo Switch, PC and iOS, and after a period of being Japanese-exclusive, a localized version arrived on December 2021. Following this, LINE: Monster Rancher was announced

for mobile devices in 2022, featuring classic monsters that could be generated through LINE friend lists.