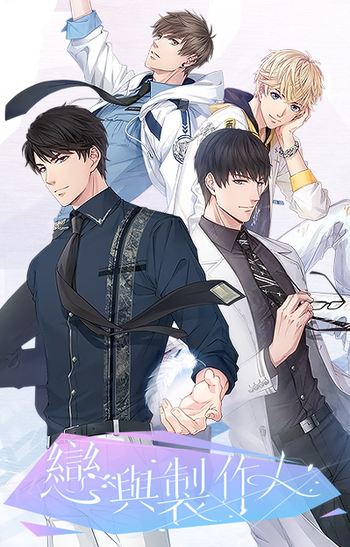 "So many things were happening all at once, trying to change my life in tremendous ways—Were they all truly just coincidences, or had they always been destined to happen?"
Advertisement:

You play as the heroine, a young 22-year-old woman living in a modern-day city called Loveland somewhere in China, and is the head of a media company that was previously run by her father. The company's flagship show, Miracle Finder, is on its final episode due to a lack of financial support for the company. The Heroine and her team attempt to petition Loveland Financial Group (LFG) for their investment renewal.

Brainstorming program contents while on her lunch break, The Heroine bumps into Kiro, a popular Idol Singer with a massive fan following while maintaining an impossibly clean record of zero negative press. Taking his record to account, The Heroine jumps at the chance to offer him as their guest star for their show’s final episode. But despite Kiro's affable personality and support, he stated that his agency is the one that plans his job, so if The Heroine’s program has a job offer, she would have to go through his manager.

On her way back to work, The Heroine was saved from being hit by a car by a mysterious Tall, Dark, and Handsome man with the ability to stop time. He seems to think she's something called an "Evolver."

Left without options, The Heroine follows up on a contact named Lucien, an accomplished neuroscientist who is able to provide insights into the kind of people featured on Miracle Finder; people with supposed supernatural abilities. After a fruitful talk, Lucien agrees to be their program consultant.

But then comes the gruesome call from LFG, informing The Heroine that they deemed her program to be unprofitable, and unredeemable. Therefore, they will pull out from investing in her company.

Panicked and furious, The Heroine storms to LFG to meet with their CEO, Victor for a final plea, and at that moment realized Victor was the man who saved her from the car crash. Boasting she will bring up her company in less than 5 years note Anime scenario. and vows to submit a plan to him by two weeks,note Game scenario. Victor agrees to have his company reassess their investment plan with her company, but instead of one plan submission in two weeks, Victor demands The Heroine to give him her company’s planning reports by one week, as well as a successful rating for her supposedly last episode of her program as a requirement. Ending on a casual note, Victor asks The Heroine to keep his supernatural abilities a secret.

With an ultimatum from Victor to come up with fresh program contents that will please him and the public, The Heroine proceeds to produce projects by collaborating with a young police officer named Gavin, her high school upperclassman to follow police investigations with inexplicable circumstances. The more she digs deeper into different cases, the more she entangles herself with the findings of supernatural genetic powers labeled as "EVOL," and the Differently Powered Individuals who has them—"The Evolvers."

As she slowly piece the supernatural cases together, she noticed a linkage between these cases with a key incident that she can’t quite recall; which suggests she may also have an Evolver gene. Unbeknownst to her, the people behind those cases are targeting her for it.

The uniquely interlaced, and intriguing story plot, mysteries surrounding all potential love interests, as well as the mystery behind the heroine herself is the major selling point of the game. Due to current affection values only being used to unlock dating scenarios that have no effect on the main story line, as of date, the heroine's relations to any of her love-interest does not affect the outcome of main story events.

The game is played under four main features:

Strong Karmas that can withstand challenging criteria are crucially needed to complete missions and advance the story. In addition to the main storyline, the game is interspersed with special events and sideline mini-games to which the player can produce additional different segments for the company, which can also grant loots to strengthen Karmas, in-game currency, and experience points to raise the heroine's company level. To sum up, the player needs to raise the heroine’s company reputation in order to unlock story chapters.

The game is available on both Android

Mr. Love: Queen's Choice has gained an anime television adaptation based on the game’s Japanese title, Love and Producer (恋とプロデューサー / Koi to Producer): EVOL x LOVE produced by MAPPA, and is simulcast in both China and Japan localized in their respective languages released on July 15, 2020. China’s international online video streaming site, WeTV has both Chinese and Japanese versions available on-demand.

SPOILER ALERT: Due to global rollouts being at least one year behind the game’s home server, story plots, and walkthroughs are bound to be spoiled with a good portion being unmarked. Viewer discretion is advised to those newly joined in from the animation adaption.Editing Note: For the convenience of editing, characters will continue to be referred by their English naming. Alternate readings of character names are listed on the character subpage.