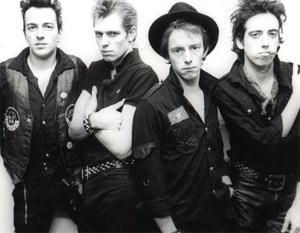 The classic line-up of The Clash. From left to right: Joe Strummer, Paul Simonon, Topper Headon, and Mick Jones.
"When they kick down your front door
How you gonna come?
With your hands on your head
Or on the trigger of your gun?"
—"The Guns of Brixton"

The Clash, AKA "the only band that matters," was a member of the original British Punk Rock movement of The '70s known as the "Class of 77". The band stands with the likes of The Ramones and The Sex Pistols in the pantheon of definitive punk rock bands. Unlike their peers at the time, however, the Clash was no firm believer of the pure Three Chords and the Truth ideology: they were not afraid of experimenting with a diverse range of musical styles, and as such were critically acclaimed musically. In addition to no-nonsense stripped-down punk rock, the Clash was known for their eclectic tastes and experimental approach, besides punk being influenced by and performing reggae, dub, ska, funk, pop-rock, New Wave and soul, among others. They were also simultaneously the second rock band to release a rap track, "The Magnificent Seven" in 1981 (a few months after Blondie's "Rapture"), and the first British group to perform rap music.

With politicised songs and committed lifestyles ensuring their fame amongst punk rockers, the Clash was unique for their relative musical sophistication, and thus are often thought as "a punk band with a rock-n-roll sound." The band's 1979 album London Calling is often hailed as one of the finest punk rock records (and rock/popular music in general) ever recorded — it is the highest-rated punk album of all time in Rolling Stone's list, i.e. the popular yardstick. It was released in December 1979 in the UK and January 1980 in the USA and was separately declared to be best album of the 1970s by the British magazine Q and best album of the 1980s by Rolling Stone in the USA. The band's reputation of not being total assholes in interviews and their strong respect for their audience only adds to the vast amount of richly deserved respect directed at the group.

Following the release of Combat Rock in 1982, guitarist Mick Jones and drummer Topper Headon were fired, the former due to Creative Differences with Strummer and the latter due to a heroin addiction. Following this, the band's lineup was radically revamped, and manager Bernard Rhodes took control of their musical direction, leading to Cut the Crap in 1985, an album that flopped upon release and was heavily derided by fans, critics, and Strummer himself. Strummer's dissatisfaction with the state of the Clash led him to disband it in 1986 after a ten-year career; the members later went onto other projects. Jones formed Big Audio Dynamite and Strummer embarked on a solo career (including some time fronting The Pogues) before founding the Mescaleros. Paul Simonon has become pretty well-known in the London fine art scene, and contributed to the Gorillaz album Plastic Beach. There were sporadic collaborations and ad-hoc performances by various combinations of the original lineup but no full reunion ever came about and the death of Strummer in 2002 laid to rest any hope of a reunion.

The Clash are the Trope Namers for: