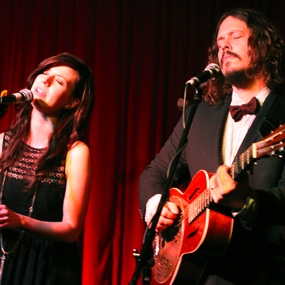 Joy & John in their natural habitat.
"If you're not sad now, you're gonna be."
"Yeah, sorry 'bout that."
Advertisement:

The Civil Wars were a musical duo comprised of singer-songwriters Joy Williams and John Paul White. The duo specialized in stripped-down folk and country songs (with White on guitar & vocals, and Williams on vocals and sometimes piano), highlighted by two-part vocal harmonies that slowly gathered them a fanbase. The two were struggling solo artists who met each other at a songwriters’ workshop in Nashville that neither had actually wanted to go to. They were teamed up by chance and found that their styles meshed well.

Working independently, the duo nonetheless attracted a surprising amount of attention. Their song "Poison & Wine" was featured on an episode of Grey's Anatomy, and they performed "Barton Hollow" on The Tonight Show. In a very coveted spot by 2011 standards, they spent time touring in support of Adele, who was a big fan of theirs (as well as Taylor Swift, Sara Bareilles and Boy George of all people). Their first release, a live recording entitled Live At Eddie's Attic, is free to download on their website. Downloads thus far have surpassed the 200,000 mark.

Despite the strong undercurrent of romance intertwined in their lyrics, John and Joy are actually both married to other people, and came across more like good buddies in their interviews. That is, until everything came to a screeching halt in late 2012, when they broke fans' hearts and announced a hiatus from touring, with "internal discord and differences of ambition" as the reason given. They did release a Self-Titled Album of new material in the summer of 2013, but in August of 2014 they confirmed they had permanently disbanded.

The Civil Wars provide examples of: