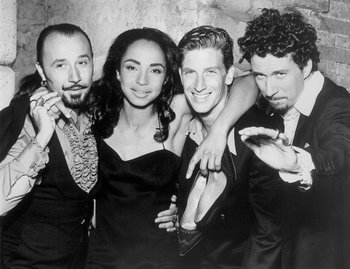 Sade (pronounce "shah-DAY") is an English band which achieved success in the 1980s, 1990s and 2000s. In 1984, Sade was created from the ashes of funk band Pride. The band consists of singer Sade Adu and three musicians: saxophonist/guitarist Stewart Mathewman, bassist Paul Denman and keyboard player Andrew Hale. Drummer Paul Cooke was originally part of the band, but left midway through the recording of Diamond Life, their debut album; they have since hired session drummers or used drum machines. The band's music features elements of soul, jazz, R&B, quiet storm, soft rock, funk, easy listening and adult contemporary music.

Sade made such an impression during their first live shows that A&R agents lined the front row seats of their concerts in order to sign them to their label; they eventually signed with Epic, who gave Sade an unusually large percentage of royalties in their contract. Sade herself is the only woman in the band and is the only one to appear on their album and single covers (the full band appear in their videos, though they are often Demoted to Extra.) Sade's 2000 release, "Lovers Rock", sold 3,881,000 copies in the United States and the prior album, 1992's "Love Deluxe", sold 3,407,000. Since 1984's "Diamond Life" debut, Sade has sold nearly 17 million units in the United States alone, according to Nielsen Sound Scan, and has sold more than 50 million units worldwide to date.

Mathewman, Denman and Hale continue to work in the music industry during Sade's downtime, and even formed their own similar band titled Sweetback, which has released two albums during the breaks between Sade's last three albums.

Not to be confused with the Marquis de Sade.