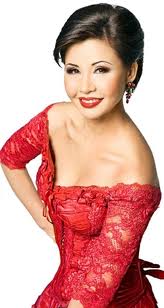 Roza Kuanyshevna Rymbaeva (born October 28, 1957 in Zhangiztobe, Kazakhstan) is a Soviet and Kazakh artist, and the most famous singer of Kazakhstan. She was born in 28 October 1957 at the Zhangiz-Tobe station in the East Kazakhstan Province to a family of railway workers. Graduated from the faculty musical-dramatic comedy of theatrical-artistic institute in Almaty (1984). From 1976 to 1979 soloist of republican youth-pop band "Gulder" ("Flowers"), from 1979 in a pop band "Arai", managed by her husband T.Okapov. Since 1979 - a soloist of Kazakhconcert, the main republican concert. She also combines as a teacher of Republic pop-circus college. The winner of various international contests of pop singers (1977 Sopot, Bulgaria, 1979, Istanbul, Turkey). The winner of grand-prix of "Gala-83" international contest in Cuba.

Her repertoire includes songs of Kazakh and foreign composers, along with the works of modern composers performs national songs in a peculiar interpretation. For the moment she sums up her 25-year career of singer, arranges her own jubilee concerts, but Roza Rymbaeva is not going to leave stage. "I have sung so many songs in my 25-year career, that I can't place all of them into my concert program" she says. Her tour now includes 30 songs. She is often compared with Alla Pugacheva. They were both recognized by people as prima donnas despite their diversity in style, image and manner. They are both great workers with hard but interesting destiny.

Roza Rymbaeva became a national artist of the USSR at the age of 28. On April 2, 2008 she became a torchbearer of the 2008 Summer Olympics torch relay lap in Almaty.