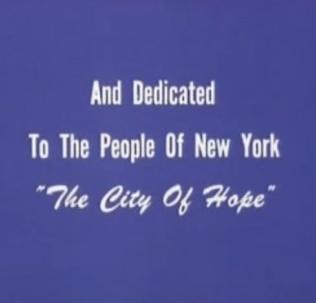 Oh Driller Killer, you Video Nasty you!
"Every great joke needs a punchline, and The Wicker Man doesn't disappoint. After Cage meets his screaming, charbroiled death, the film ends and a title slate appears: "For JOHNNY RAMONE." Sure. I don't know why it's there, and I don't want to find out."
— Cracked
Advertisement:

When a writer or show writer want to thank someone in particular, they can dedicate their work to them. Very frequent in Literature, where it's a tradition; literary dedications usually appear at the beginning of the work. A longer page of acknowledgements usually comes at the end. Films will often have a list of special thanks near the end of the credits, often for friends and family and consultants who contributed to the film.

A specific subtrope is In Memoriam, where a movie or television episode is dedicated to someone connected to the show who recently died, usually in a notice at the end of the show.

Compare Viewers Like You, This Song Goes Out to TV Tropes.