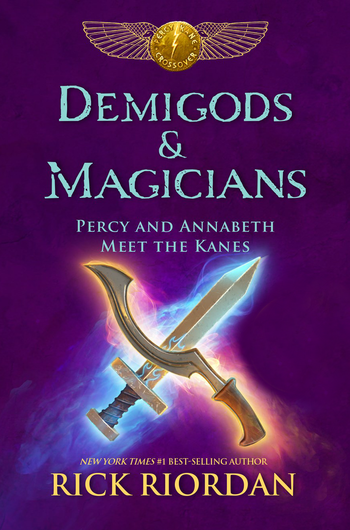 "What have you done?"
"Taken your future, without that, you're nothing."
Whoever brought Percy and me [Carter] together, whoever orchestrated our crossing paths... it smacks of Chaos. I can't help thinking this was an experiment to see what kind of havoc would result. Potassium and water. Matter and antimatter.
Advertisement:

Demigods & Magicians is a collection of three short Crossover stories between The Camp Half-Blood Series and The Kane Chronicles by Rick Riordan. The short stories are called "The Son of Sobek", "The Staff of Serapis" and "The Crown of Ptolemy". These stories take place the summer after the end of The Kane Chronicles and The Heroes of Olympus series. During his The Sword of Summer book tour in 2015, Rick Riordan declared the completion of the short stories as their own book.

"The Son of Sobek" (2013) is the story in which Percy Jackson meets Carter Kane. The story starts with Carter revealing that he was eaten by a giant crocodile he was looking for, and an introduction. Thankfully; however, he is saved by Percy, but the monster escapes. Through a misunderstanding, the two get in a fight, which ends in a truce once they are reminded about the monster crocodile. While running towards the monsters the two introduce themselves to each other, and Carter reveals that the crocodile is a petsuchos — a son of Sobek. Finding the monster in a cul-de-sac, the two fight against it and defeat it. At a diner afterwards, Percy and Carter give the rundown to each other, and Carter draws a hieroglyph on Percy's hand in case they need to contact each other again.

"The Staff of Serapis" (2014) is the story in which Annabeth Chase meets Sadie Kane. It starts with Annabeth trying to catch the F train to Percy's place after having a rough day, or at least until she spots a weird looking monster, which looks like a lion and wolf stuck together and wedged into a hermit crab shell. Much to Annabeth's surprise, though, the monster doesn't attack her and boards the A train, leaving her to pursue it. While following it, she figures out that the monster is made up of 3 pieces and is missing a part of itself, before she encounters Sadie fighting the third piece of the monster at the first Brooklyn stop, which looks like a black labrador retriever with the back end of a tadpole. Unfortunately, the monster Annabeth was following escapes, but the two manage to capture the monster Sadie was fighting and introduce themselves and discuss what is happening. Eventually the two come to the conclusion that the monsters are in fact the remains of a staff trying to fix itself, but unfortunately the part of the staff that they captured escapes. The two are then forced to follow it towards a magical storm creating a lighthouse. Once inside they meet the risen god Serapis, who claims to be trying to recreate the old empire

he was supreme god in and to drain the power of the other gods. Unable to allow him to succeed, Annabeth and Sadie put a stop to him and his goals.

"The Crown of Ptolemy" (2015) starts off with Percy and Annabeth trying to summon Carter and by extension his sister Sadie; with the hieroglyph he was given in "The Son of Sobek", to help them fight Setne. Unfortunately, the Kane siblings don't answer forcing the two demigods to attack Setne themselves. However, their attack doesn't work, with Setne quickly defeating them with his magic and then summoning the goddess Wadjet. After summoning Wadjet, Setne took a selfie with her (much to the goddess' irritation) just before taking her crown

and consuming her essence. Setne, now done with the goddess, turns towards Percy and Annabeth to consume them too in order to grow in power, but thankfully fails. He does, however, consume Percy's sword Riptide and began to try and suck everything in. Thankfully, the Kane siblings finally show up, forcing Setne to retreat. The four realize that Setne is trying to make the crown

and will soon try to take the goddess Nekhbet's crown; the hedjet

, to complete the crown of Ptolemy and consume her essence as well. Together the four agree that the best way to fight Setne is to use his own strategy against him and mix their powers together. It works, and Setne is finally defeated. Afterwards, the four agree to keep in contact in case anyone else tries to combine Greek and Egyptian magic.

"We'll have to keep our worlds separate as much as possible. The info is too dangerous."

Alternative Title(s): The Son Of Sobek, The Staff Of Serapis, The Crown Of Ptolemy