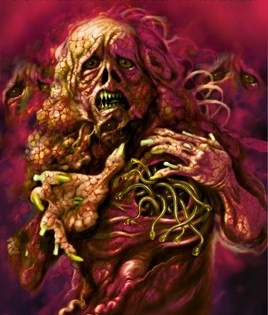 Lord Loss sows all the sorrows of the world...
Advertisement:

The Demonata is the second full-length Fantasy Horror series by Irish author Darren Shan. Unlike The Saga, this series has three narrators, with different books told from different perspectives.

To say this series is violent is like saying the ocean is wet; lets make this clear- this story is for children, but right from the get-go the reader will be treated to some of the most ludicrously over-the-top ultraviolence ever put to print. The Demonata are evil with a capital E, and many, many characters die explicitly gruesome and horrific deaths on-page, to say nothing of the countless others whose horribly mutilated corpses are come across. You have been warned.