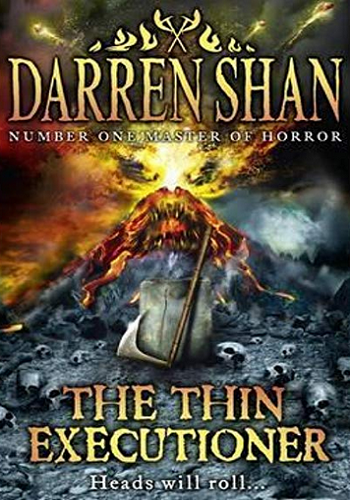 Departing from his fantasy and horror roots, Darren Shan returns with The Thin Executioner. Set in a medieval Qurac, the book is notionally inspired by The Adventures of Huckleberry Finn.
Advertisement:

The story follows Jebel Rum, the youngest, small and least favoured child of the executioner of the city of Wadi, who holds a position in society second only to the Um Wadi's leader. His father announces he will be stepping down as executioner in a year's time and that his two oldest sons will be competing in the competition to claim the title. By omitting Jebel from his announcement, he publicly disgraces him and, in a rash moment, Jebel decides to undertake a quest that hasn't been completed in living memory: to journey to the sacred mountain of Tubaygat and petition the fire god Sabbah Eid to give him strength and invincibility so he can enter the competition, beat his brothers, claim the hand of the Um Wadi princess and become the thin executioner.

As part of the requirements of the quest, he enlists the aid of the slave, Tel Hesani, who agrees to accompany Jebel and ultimately be sacrificed to Sabbah Eid in exchange for Jebel having his family freed from slavery upon his return. Together, the two set off on foot across the ancient land of Makhras to reach Tubaygat and summon Sabbah Eid. Along the way, they run into the many, diverse tribes of Makhras, including the cannibalistic Um Biyara and their depraved leader Qasr Bint, as well as the enigmatic Master Bush and Master Blair.