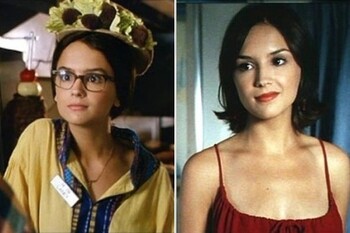 Like magic! Hollywood magic.
Like in one of those movies, you know? When they take off their glasses and put down their hair. "Why, Miss Finch, you're beautiful."
— Neil Gaiman, Fragile Things
Advertisement:

A stock plot: an ugly duckling goes off in private, loses the glasses, takes down her hair, maybe gets a little makeup and some nicer clothes and finally returns as a swan.

Another version of this would be "Miss Jones Syndrome", where a dowdy, bespectacled woman switches to contacts, shakes loose her hair, and is told by the unrequited object of her affections, "Why, Miss Jones, you are beautiful."

This is mainly possible because most of the "ugly" women on TV or in the movies are beautiful actresses in bad clothes, though it also has something to do with Hollywood's unforgivingly narrow standards of physical attractiveness, particularly for women.

Story-wise, it's a nice little way of advancing An Aesop about how looks aren't everything, while saving the hero from actually having to go out with an ugly girl (see also: Sweet and Sour Grapes).

Opposed by Nerds Are Sexy, and is directly contrasted by Ugly All Along. See She Is All Grown Up for the related prettification of a childhood friend. Contrast Just the Way You Are, where a character is beautiful to begin with, and Unnecessary Makeover, where a character's new appearance is disliked. The trope, She Cleans Up Nicely, often differs in that while the girl in question might like rough casual clothes or work gear most of the time, she knows damn well she can look stunningly good when she wants to be.

See also Suetiful All Along, Clark Kent Outfit, and Fanservice Pack. Contrast Irony as She Is Cast, where this is always the potential, but it is never tapped. Progressively Prettier is applying a similar change to a character without much in-universe reaction (it's for the audience's benefit), because it's done either gradually or between adaptations.

Nowadays, straight examples are becoming less common, but the trope is still used from time to time. When it is, the work will often claim that beauty is less important than the Character Development or other plot changes that unlock it—which may or may not be convincing.

While the trope is usually considered Always Female, male examples do exist, along the lines of a slob or nerd cleaning up his act, getting a haircut and trading in the dirty wifebeater or Star Trek T-shirt for Armani or Savile Row items. Or, in more recent works, an unhappy Camp Gay and/or transgender character may get a classic makeover just like the typical female ugly duckling, and then be just as beautiful at the prom in a Pimped-Out Dress.

One of the nerd girls responds to Jonesy's complaints by revealing how out of his league she is.

One of the nerd girls responds to Jonesy's complaints by revealing how out of his league she is.