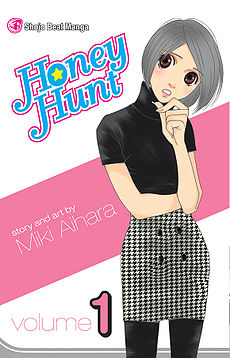 Honey Hunt (ハニーハント Haniihanto) is a shōjo manga series by Miki Aihara, which began in 2006 and went on hiatus in 2009. It is licensed for English language release in North America by Viz Media.

Quiet and unassuming Yura Onozuka lives in the shadow of her famous celebrity parents: Yukari Shiraki, a beautiful and talented actress, and Takayuki Onozuka, the first Japanese composer to win an Academy Award. When her mother coldly announces that she and Yura's father are getting divorced, and Yura learns that her mother has been sleeping with her best friend and crush, Yura feels abandoned and left alone by everyone around her. Yura decides to become an actress with the goal of becoming a better actress than her mother so that she can show everyone that she is worth something as an individual, and not be judged a disappointment because she is continuously compared to her celebrity parents.

Keiichi Mizorogi, a professional manager formerly employed by Yura's father, scouts her to be an actress and aids her in her quest. Yura gradually develops the confidence to land the lead role in an upcoming television drama series. Along the way, Yura also gains the interest of two rising male idols: composer Q-Ta Minamitani, who first meets Yura when she is running away from her hotel during her parents' divorce, and his twin brother, Haruka Minamitani, a member of popular band Knights and the male lead of the drama in which Yura will star.

Has been on hiatus for years, and is most likely cancelled.