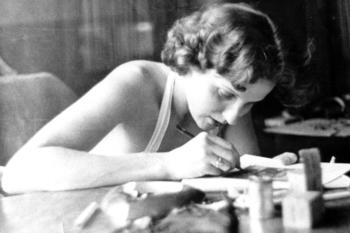 "Certainly my inner world will never be a peaceful place of bloom; it will have some peace, and occasional riots of bloom, but always a little fight going on too. There is no way I can be peacefully happy in this society and in this skin. I am committed to Uneasy Street. I like it; it is my idea that this street leads to the future, and that I am being true to a way of life which is not here yet, but is more real than what is here."
— James Tiptree Jr.
Advertisement:

Alice Bradley Sheldon (August 24, 1915 - May 19, 1987), better known in Sci-Fi circles by her pen name James Tiptree Jr., was one of the most popular writers of feminist Science Fiction. Tiptree debuted her first story, 1968's Birth of A Salesman, which was published in the March issue of Analog (then known as Analog Science Fact and Fiction).

Her male pen name came from a number of different sources: "Tiptree" came from a branded jar of marmalade named after the British village in Essex, while "Jr." was suggested by her husband. She would elaborate in an interview that assuming the identity of a man would make her slip by mostly unobserved by the male readers. This also made it easier for her to write the kind of fiction she was interested in.

She continued writing her stories as James Tiptree Jr., and sometimes as Raccoona Sheldon, from the late 60s to the mid-70s, while refusing to meet her fans in public. In 1977, Tiptree's identity was finally exposed, leading many of the writers who assumed her to be male to hang their heads in embarrassment. Despite this, Tiptree remained a respected contributor to the field and would continue to write until her tragic suicide pact in 1987 with her husband, Huntingdon Sheldon, following years of depression and physical health issues.

Her Smoke Rose Up Forever, compiled in 1990, is an omnibus of her most famous short stories that explore themes of human nature, sexuality and gender, misogyny, epistemology, alien encounters and metaphysical experiences. Many of these narratives are from the perspectives of oppressed women or weak-willed men.

The James Tiptree, Jr. Literary Award, founded in 1991, was an annual literary prize for works that explored or challenged ideas of gender. In 2019, under pressure from social media and fan communication, the name was changed to The Otherwise Award, on the grounds that the Sheldons' murder-suicide pact resembled caregiver abusenote most people who knew the couple were aware that there was such a pact, but some suggested that Huntington may not have been ready to die. It also appeared to valorize the murderer while sidelining the disabled person, a common practice in reports about caregiver murders. "Otherwise" is a term often used in black queer feminist scholarship. Renewing their commitment to questioning gender roles and portrayals in fantasy and science fiction, the organizers intend to promote "works that have a broad, intersectional, trans-inclusive understanding of gender in the context of race, class, nationality, disability, and more."