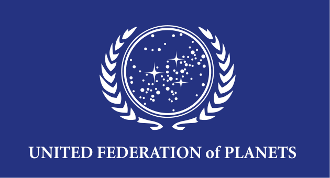 United-Nations-esque logo and soothing blue tones optional, but recommended.
Fry: DOOP? What's that?
Farnsworth: It's similar to the United Nations from your time, Fry.
Fry: Uh...
Hermes: Or like the Federation from your Star Trek program.
Fry: Oh!
— Futurama
Advertisement:

The (mostly) good counterpart to The Empire, generally a democracy and/or presided over by Reasonable Authority Figures, and a superstate composed of many different nations and races, inspired by the structure of the United States or the United Nations. The actual name may vary, but not by much. It is likely to have the words "Federation", "United", "Alliance" or equivalent verbiage somewhere in the official title.

In most sci-fi settings, the Federation is predominantly human (or composed of humans, Human Aliens and Rubber-Forehead Aliens), usually commands a fleet of Standard Human Spaceships, and is most likely to look the closest to 20 Minutes into the Future when the other factions may be Crystal Spires and Togas, Organic Technology or both. Expect its Capital to be the Shining City and its citizens to wear anything but Spikes of Villainy or Putting on the Reich.

Rarely evil, but will sometimes suffer from red tape, and the occasional corrupt politicians and/or generals. When they are evil, The Federation will oppose the independence of its colonies, whether space colonies in orbit, Mars or other planets in the system, or on entirely different systems. Even in this case, the main opposing force may be shown to be Well Intentioned Extremists and/or an example of The Revolution Will Not Be Civilized, willing to hurt innocent people to try to gain their independence, or worse, being used as a front for a truly evil Big Bad. The heroes will usually be either among the good soldiers of the Federation or neutral parties who get caught up in the war; this is especially true in anime. In this case, The Federation will be seen as the lesser of two evils. Occasionally you will get a People's Republic of Tyranny or The Dictatorship.

If pitted against The Empire, is usually in a Cold War-like state, just recovering from a recent war, or a few international incidents from plunging into one. They often give covert aid (weapons, funds, supplies) to any resistance movements, but won't intervene directly unless they're already at war. In general, it frequently plays an America-like role in the political climate of the setting. If there's a movement to overthrow or undermine it, it's likely The Remnant.

A "federation" is a relatively loose conglomeration of states with common goals and purposes, coordinated by a central government that's independent of them all, and from which they have a certain amount of autonomy. The oldest continuous federation and probably the best known example in the real world is the United States of America (its federal government has over the years grown a lot stronger than it originally was but the US still retains a federal character). Another example is Russia: not only is its official name "Russian Federation", but most of the lands with a significant ethnic population, like Chechnya, are highly autonomous regions known as "republics". The Swiss Confederation is also an example. It should be noted, however, that many so-called "federations" in fiction are nothing of the sort. If the group acts much more like a single country than a bunch of mostly autonomous states, it's probably The Republic.

Note that a 'Confederation' is typically a conglomeration of states that are even more loosely bound than a Federation, the primary difference is that in a Confederation, the federal good is 'never' allowed to outweigh the good of the individual state. Switzerland is a modern example of a successful confederal democracy (today, however, it is a federation that retains the name of a confederation). The United Arab Emirates is an example of a confederation of absolute monarchies.note In practice the two largest emirates, Abu Dhabi and Dubai, have significantly more power than the other five, with their monarchs being the president and prime minister of the confederation, respectively. Some authors consider the European Union to be a confederation, though it is usually seen as a unique, sui generis entity. In fiction, Confederations are typically portrayed as (at best) antagonistic neutrals and at worst, bad guys. This seems to be a holdover from the US civil war. It should also be pointed out that word "Confederation" as a term predates the term "Federation" and the original meaning of Confederation was basically understood to be the same as the Federation. A good rule of thumb for the difference between the two types of organizations is that in confederations, member-states are allowed to leave through a usually codified process.

Compare and contrast The Alliance, usually a more temporary union of nations against a common enemy. Also compare the Fictional United Nations, where the overall governing body is weaker, it may contain both good and evil members, and it is much less unified (no unified military, and not treated as a single state by outsiders).

Then, a revolution kicks off, trying to fix the system. Unfortunately the revolution is modeled after the French Revolution, complete with a leader named Rob S. Pierre. Saying that it didn't end well would be a kind of an understatement. Of course, now that the Havenite version of the Thermidorian Reaction has occurred (Thomas Theisman and Eloise Pritchart), and with their version of Napoleon removed ahead of schedule (Esther McQueen), because of Saint-Just ordering her death because of how close her coup came to success), things seem to be on track for the restored Republic of Haven. Aside from the whole resumption of war with Manticore, the cancelled negotiations, then the super-spies Victor Cachat and Anton Zilwicki turning up in Nouveau Paris with proof positive that Manticore and Haven had been manipulated into war with each other by an outside third party with plans for galactic domination. This severely annoys President Pritchart, who turns up in the Manticore System at midnight, sits down with Queen Elizabeth III, and ends up not only putting a permanent end to the war, but sealing a military alliance with Manticore. The bad guys are screwed after that, and the Republic of Haven is once and for all firmly on the side of the light.