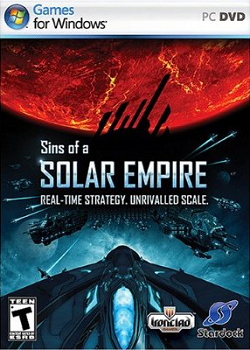 The Fate of your Empire awaits you.
Sins of a Solar Empire is an RT4X game, fusing both Real-Time Strategy and 4X gameplay into one package. It was released on February 2008 to wide acclaim.
Advertisement:

There are three factions in the game. There's the Trader Emergency Coalition, a semi-cohesive organization of human worlds who have banded together to try to defend their worlds from aggression, using Kinetic Weapons, heavy armor and Macross Missile Massacres. There's the Advent, transhumans who were exiled by the traders' ancestors many years ago for tampering with Psychic Powers, Crystal Spires and Togas and Frickin' Laser Beams , and are now back for Revenge. And there's the Vasari, Scary Dogmatic Aliens who once ruled a huge interstellar empire, but whose worlds have been gradually swallowed by... something. Every ship sent to investigate this menace has disappeared, except for one ship which returned with its crew driven mad. The remnants of a Vasari colony, now surviving as nomadic Planet Looters, have fled to this corner of the galaxy, leaving warning buoys behind them... and watching in dismay as those buoys wink out, one by one. All while the humans, who they initially thought would be easy targets, dragged them down into a Hopeless War.

Sounds like an interesting potential plot, right?—Gray-and-Grey Morality, possible Eldritch Abominations, who knows what else. Unfortunately, the story basically ends there. You can set up a multiplayer match vs. AI or a multiplayer match vs other people, but there's no single-player campaign. However, there is abundant backstory, very dedicated to showing that each of the 3 main races has committed sins of their own and are now paying for them (hence the title).

The game was designed from the ground up to be playable on a wide spectrum of hardware configurations, including ones most of its contemporaries would write off as "obsolete"; this didn't hurt sales by any means. It was also free of Copy Protection, making headlines at a time when invasive, unnecessary DRM was turning people off Spore. A pirated copy was essentially a fully-functional demo, allowing you to skirmish against AI but not to play over the Internet; you needed to buy the game for that. Those who held pro-DRM attitudes predicted failure, but as of September 2008 Sins had sold 500,000 copies, recouping its $1M development costs months before any of the $10 Expansion Packs came out. (There's no hard data as to how and why this game managed to be financially successful, but you can guess what most tropers think. Having said that, Ironclad Games eventually switched to Steam, and more pertinently Valve Anti-Cheat, as their distribution method.)

Speaking of expansion packs, there were two "micro-expansions" released: "Entrenchment" added new ships and starbases; "Diplomacy" added more diplomatic options, including a (theoretically) non-military win condition. A third was supposedly going to contain a single-player campaign... but quietly evaporated before being Un-Cancelled (without a campaign) in March 2011 as "Rebellion," a full-sized expansion in which players of each faction can choose loyalty or rebellion, and gain access to new tech trees and ship classes in doing so. Rebellion is a standalone expansion, with a discount for those who owned the original installment. Finally, for those who don't care to fork out more money, there is a robust and thriving Game Mod scene, dedicated to doing anything from providing factions from pre-existing sci-fi franchises to graphical updates to full game overhauls to code optimization so that the game doesn't crash as much. That's right, fans love their Sins so much that they are voluntarily debugging it.