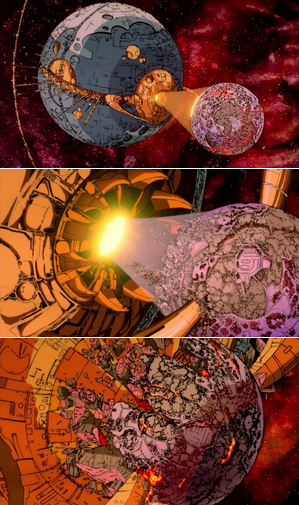 How many chomps does it take to get to the center of a planet? The world may never know...note or live to tell it.
"Stan Lee thinks big. He came up with Galactus, a massive purple guy who eats entire planets. That's menacing! To get any more epic in scope, you'd have to have Andromedax, The Galaxy Who Shoots Other Galaxies With A Big, Galaxy-Sized Bazooka. Even better, Galactus isn't some sort of hand-chafing nefarious schemer. He's just very large, very hungry, and loves the great taste of ecospheres."
— Lore Sjöberg, The Book of Ratings,

This is the way the world ends, not with a bang, but a nom (all apologies to T. S. Eliot).

A character that not only destroys but eats planets for nourishment. They may suck the life-force from the biosphere, feed off its gravitic potential or magnetic field, or just start taking big bites out of the crust and mantle.

Planet Looters and Alien Locusts taken to the Nth degree. May overlap with Grey Goo. Taking this trope to the Nth degree, is Spacetime Eater. Compare Omnicidal Maniac and Planetary Parasite. This is an X-1 class threat in Apocalypse How. When a character eats planet-sized portions (or eats so much they're the size of a planet) that's Big Eater.

Subtrope of Planet Destroyer (because a being who eats planets for breakfast would also have the necessary strength to destroy it) and Fantastic Diet Requirement.

This would have been called "World Hunger", but that's a real life problem with real life consequences. We guess.

With the power of the Evol Trigger, Kamen Rider Evol has the ability to consume planets with the use of black holes, making himself stronger in the process.

With the power of the Evol Trigger, Kamen Rider Evol has the ability to consume planets with the use of black holes, making himself stronger in the process.