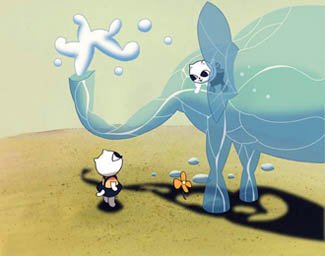 And the aquoliphaunt was Ringo.
Advertisement:

Cat Soup (a.k.a. Nekojiru-Sou) is a multiple award-winning animated short film directed by Tatsuo Sato and inspired by the work of the late manga artist Chiyomi "Nekojiru" Hashiguchi.

It centers around a family of anthropomorphic cats, specifically two kittens: the terminally ill Nyako and her younger brother Nyatta. After Nyako dies, Nyatta manages to reclaim half of her soul from Jizou

. This brings her back to life, but leaves her brain-dead. Determined to return his sister back to normal, Nyatta goes on a surreal journey through the land of the dead to retrieve the other half. Or something.

Nyako and Nyatta were also the protagonists of the earlier Nekojiru Gekijou, a Black Comedy series of shorts that were less surreal and more cynical.

Not to be confused with Neko Ramen.