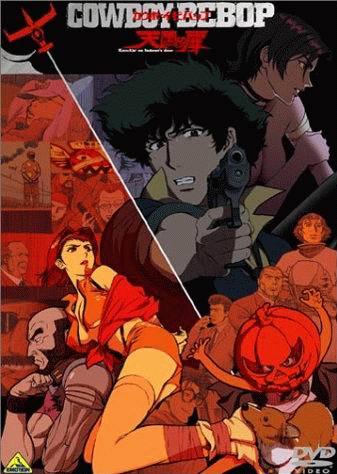 Are you living in the real world?
Advertisement:

Cowboy Bebop: Knockin on Heaven's Doornote Cowboy Bebop: The Movie outside of Japan is a 2001 anime sci-fi film based off the popular show of the same name. It serves as a Interquel to the series, as the events of the film take place chronologically between episodes 22 and 23 of the show. It was directed by Shinichiro Watanabe with assistance from Hiroyuki Okiura (A Letter to Momo) and Tensai Okamura (Darker Than Black), with the screenplay written by Keiko Nobumoto, who also wrote and co-wrote 11 episodes of the main series, and was released on September 1, 2001.

The Bebop crew — Spike (Kōichi Yamadera), Jet (Unshō Ishizuka), Faye (Megumi Hayashibara), Ed (Aoi Tada), and Ein — are going about their usual bounty hunter business when a bomb goes off in a city on Mars. The culprit, Vincent Volaju, soon has a sizeable bounty placed on his head. The gang jumps at the chance to catch Vincent Volaju (Tsutomu Isobe) and claim the reward, but soon discover a deeper well of conspiracy and revenge that puts the fate of the city — and the lives of the Bebop crew—at stake.

The dub of the film was released in theaters for a limited run in 2003 before going to DVD.

ARE YOU LIVING IN THE REAL WORLD?