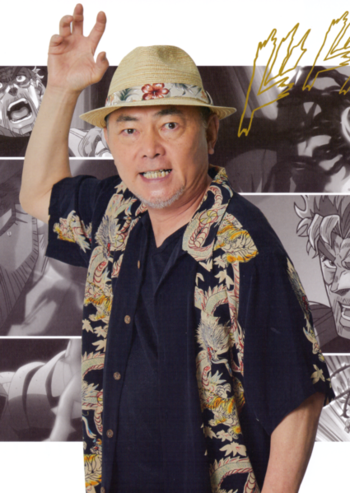 Are you gonna do the "Describe Unshō Ishizuka here" thing?

Unshō Ishizuka (May 16, 1951 - August 13, 2018) was a seiyuu with a deep, baritone voice. He was famous in Japan for being the Narrator and voice of Professor Oak in Pokémon: The Series.

Also very good for 'good' father figures, though like Fumihiko Tachiki, he could subvert it into 'bad' (or at least just 'strict') father, or straight up villains. He was the dub actor of Liam Neeson and Laurence Fishburne.

Also known for his remarkable singing prowess where his deep voice becomes extremely sensual. He passed away on August 13th 2018 due to esophageal cancer while in the middle of voicing many characters (and managed to finish several recording sessions to the point of having Posthumous Credit to some of his roles released for 2018 and early 2019) and will be forever missed. A true hardworking, legendary seiyuu to the very end.

I have to list the notable roles by Unsho Ishizuka!? OH NO!!!