Battle in the Rain 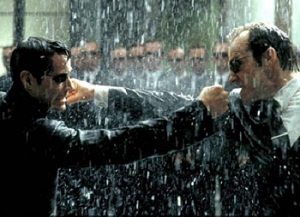 Tonight's forecast will be partly cloudy with a 90% chance of asskicking.
Pintel: Have you noticed, on top of everything, that it's raining?
Ragetti: That's a bad sign!
— Pirates of the Caribbean: At World's End
Advertisement:

Two opponents, either individuals or armies, face off against each other, ready to throw down at a moment's notice, with clouds lowering overhead. Just as the fight is about to start, it begins to rain on the combatants, as if the tension in the air has wrung the moisture out of it.

Interestingly, hardly anyone in these fights ever slips because of the rain.

A subtrope of Empathic Environment. Sometimes combined with Dramatic Thunder. Often, obviously, foreshadowed by A Storm Is Coming. At the end, Sand In My Eyes may be expressed by blaming the wetness on their faces as rainfall. Characters often Dies Wide Open, so the rain can fall into their open eyes and confirm He's Dead, Jim. (Though, this is more common in animation, because trying it in live-action would become Narm rather quickly due to the "dead" characters reflexively closing their eyes.) Compare and contrast with Battle Amongst the Flames.

As a side note, this is a rare case where the phrase "climatic battle" actually makes sense.