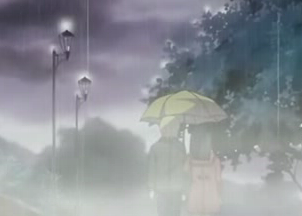 The appearance of a faint white or grey fog or glow around and above objects and people during a rainstorm. This is a representation of a real-world phenomenon — a kind of mist generated by the shattering of raindrops impacting on a surface — which normally can only be seen under the right angles and light conditions, but which in anime can be seen all the time during a rainstorm. Adds an almost otherworldly air to rainy scenes, but also makes drawing rain much easier.

See also Redemption in the Rain.