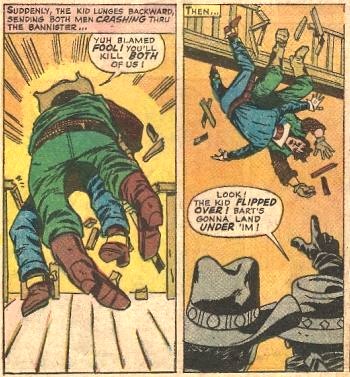 OSHA guidelines never seem to account for dramatic falls.
"If someone is shot, do they really need to stagger towards the nearest railing and topple unconvincingly over it? From our records, it appears they do [sigh]."
— Movie Deaths Database, "Falling"
Advertisement:

Even OSHA compliance is no guarantee of safety. A mook (usually) standing behind a railing, usually about waist-height, on an elevated surface who is shot during a firefight will invariably fall forward and flip over the railing, falling to his (presumed) demise, probably Wilhelm screaming on the way down. Conversely, someone standing in front of a railing will flip backward over the railing. This occurs even if the mook was shot from the direction of the railing with a weapon that normally throws people violently backwards. The phenomenon that causes this is called Ledge Gravity (not to be confused with Edge Gravity, which is basically the opposite), and specifies that people will tend to fall in the direction they'll fall furthest because there's more gravity that way.

Although this technique gained prominence in Westerns with the railed balcony on the second story of every building in a dusty town, it can be found in any setting.

If the ledge is high enough, a Disney Villain Death may occur.

Not to be confused with people being killed when they land on a spiked railing.