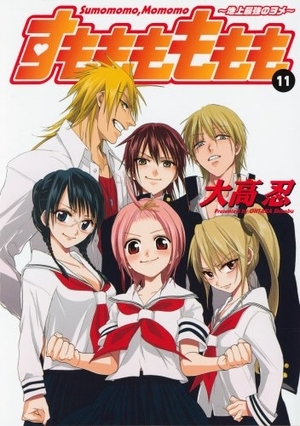 Koshi Inuzuka is an Ordinary High-School Student, handsome and intelligent with dreams of moving into the legal profession... but he's also a member of a martial arts family headed by his huge, muscular father, who persistently looks down upon his chosen path. Said father is very much pleased when Momoko Kuzuryu, the tiny, annoying, love-struck Genki Girl daughter of another martial arts family, seeks out Koshi to sire a child capable of mastering her family's most powerful techniques. Naturally, this not-so-subtle strongarming into Arranged Marriage (of course supported by the fathers of both youngsters) and newfound accompaniment of a pink-haired, Kamen Rider henshin pose-copying, totally enamoured imbecile is not to the taste of violence-phobic and martial arts-hating Koshi.

However, they soon find the reasoning for the Arranged Marriage goes a lot deeper than they thought - Koshi and Momoko are part of a plan to form a bond of blood between twelve Zodiac-related martial arts families and prevent a colossal war between two warring factions of said families, one headed by the Dragon-based family of which Momoko is a member, and the other headed by the Dog-based family that includes Koshi. Naturally, some of the families view such a war as a perfect opportunity to rise above the others - and send assassins after Koshi to ensure the marriage does not proceed.

So far, a reasonably typical martial-arts-and-romance manga and anime. Now, factor into the equation that everything in the show except Koshi is bordering on the insane, and anything and everything is taken to ridiculous extremes.

The entire show possesses the subtlety of a hard kick in the face, and packs itself to the rafters with a horde of bizarre nutcases protecting Koshi, baying for his blood, falling madly in love with him and each other and generally going Super-Deformed a lot and doing big shiny martial arts somewhere between Fist of the North Star and Dragon Ball that transform the whole affair into some giant amorphous blob of Ecchi Love Dodecahedron borderline-Gag Series romantic comedy with lots of people beating each other up in completely over-the-top ways on a regular basis.

See also Magi: Labyrinth of Magic, by the same author.