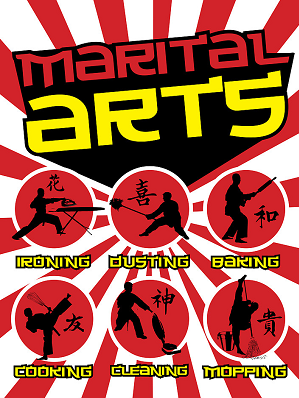 Get those chores done, now! Chop chop!
"We would parade across the rooftops in the still of night, making naught but a whisper. By the time they realized there was a parade it was already over..."
— Karashi (on ninja marching bands

In shows which feature martial arts heavily, there are a lot of different styles found in The 'Verse. This is Truth in Television as there have been many martial arts developed throughout history often based on local needs. For example Okinawan weapons

were developed from household and farm implements.

Sometimes everything is made into a martial art. Need medical attention? We have Ninja Medics! The King's scribe? He probably knows Martial Arts Calligraphy. Need trees chopped? Black Belt Lumberjacks. Expect these characters to have an Astonishingly Appropriate Appearance related to their fighting style. For even greater Truth in Television, keep in mind that the term "kung-fu" actually means any skill which requires hard work, discipline and practice — not just martial arts.

This trope covers instances where a martial art is developed from humble beginnings. This trope is sometimes invoked by games that seek to be balanced for PVP or competitive dueling.

See also Asian Cleaver Fever. Compare Mundane Made Awesome, Improbable Sports Skills and Everybody Was Kung-Fu Fighting. It's often a case of I Know Kung-Faux.

Contrast What the Fu Are You Doing?.

I Know Madden Kombat is a subtrope of this trope, dealing with sports as martial arts. Dance Battler and Wax On, Wax Off are related. Inverse of Martial Arts for Mundane Purposes, where conventional martial arts skills are used for mundane purposes.