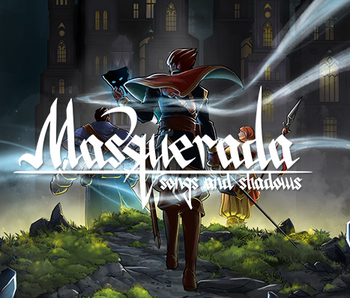 Masquerada: Songs and Shadows is a story-driven Action RPG developed by a Singaporean Witching Hour Studios. It was funded

It takes place in the Citte Della Ombré, a fantasy Venetian-styled city which is the capital of a country called Ombre. The Citte is ruled by an aristocratic class called the Masquerada, named such because only they have access to mascherines, ancient artifacts which imbue the wearer with elemental powers. Those without mascherines are called the Contadani, and they comprise the working class of the Citte. The difference between the two has grown in recent years; the Contadani live in poveristic squalor while the Masquerada enjoy lavish chateaus and fight over territory. This stark difference has caused discontent among the Contadani and led to the rise of the Maskrunners, a group of rebels who own mascherines but owe no allegiance to any of the ruling guilds or the Registry - which is the central government. Some factions of Maskrunners are little more than criminals, while others fight for the dream of a better life for the Contadani.

Players follow the story of Inspettore Cicero Gavar, who is returning to the Citte after five years in exile due to the events of the prologue. Cicero has been offered enough money to last him the rest of his life by the Vaorone of the city in order to return and investigate the disappearance of one of the Vaorone's subordinates.

The game contains stunning visuals, a beautiful soundtrack with vocals, and an All-Star Cast, including Matthew Mercer, Jennifer Hale, Rick D. Wasserman, Crispin Freeman and others. It has its own webpage here