Price on Their Head 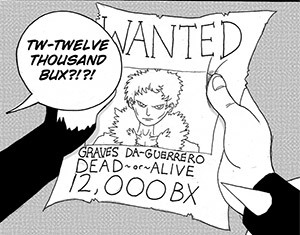 "I'm going to put a price on your head that's so big, when you look in the mirror your reflection's gonna want to shoot you in the face."
— Dean Sanderson, The Mechanic (2011)
Advertisement:

This person is badly wanted by somebody. Wanted badly enough that they are willing to pay a large sum of money whoever brings in this person. They often don't care if this person arrives dead or alive. The bounty is usually offered by either The Law or a criminal. Or both.

This person (and the price) will often feature on a "Wanted!" Poster. The price will usually attract Bounty Hunters. If said bounty hunters end up with a bounty on their own head, see Contract on the Hitman and The Hunter Becomes the Hunted.

Compare Demanding Their Head when someone literally puts a bounty on a severed head.