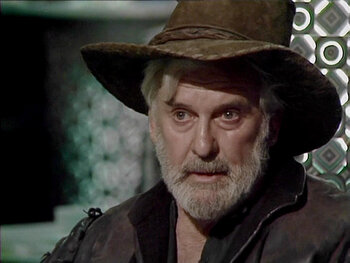 If you don't know who he is, there's a photo of him in the next scene.
Written by Robert Holmes.
Directed by George Spenton-Foster.
Airdate: 20 March 1979.
Advertisement:

Blake is seeking a fugitive cybersurgeon called Docholli (the only person who knows the location of Star One) in the neutral gambling haven of Freedom City. Docholli is being bodyguarded by Travis, lying in wait for Blake, but he in turn gets caught up in the rival schemes of Servalan and Krantor, the criminal boss of Freedom City. The situation is further complicated by Avon and Vila who decide to rob the Freedom City casino with the help of Orac.