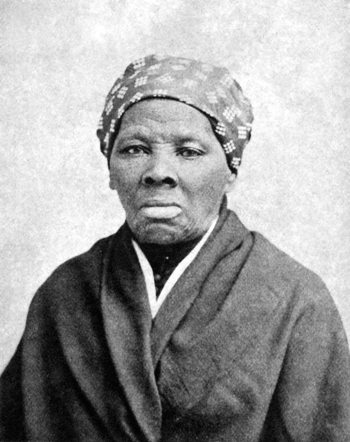 "Harriet Tubman didn't take no stuff
Wasn't scared of nothing neither
Didn't come in this world to be no slave
And wasn't going to stay one either."
—"Harriet Tubman" (poem) by Eloise Greenfield
Advertisement:

Harriet Tubman was born sometime in the 1820s, a slave on an American plantation in Maryland. She started life as a house slave, and when she grew up was assigned to work in the fields and forests. One day when she was still quite young, she was running an errand at a dry-goods store and was caught in the pursuit of a runaway slave. She was left with a violent head injury, and for the rest of her life she suffered seizures and narcoleptic fits that would leave her unconscious and unable to be woken up.

In 1849, she successfully escaped from Maryland into the free state of Pennsylvania.

"When I found I had crossed that line, I looked at my hands to see if I was the same person. There was such a glory over everything; the sun came like gold through the trees, and over the fields, and I felt like I was in Heaven."

However, she soon decided that it wasn't enough to have won her own freedom: She wanted the freedom of her parents, siblings and friends. So, over the course of 11 years, she returned 13 times to the South, risking increasing danger each time, and never using the same route twice. She never once was caught nor lost a passenger despite a rumored bounty of $30,000 on her head. To that end, she had a simple policy for her charges: It was their decision of whether they wanted to take the risk escaping with her, but once they started, there was no turning back. Legend tells that when she had a runaway who got cold feet and was about to return to his plantation, she held him at gunpoint and said, "Dead niggers tell no tales. You go on or die."

She was also known for her daring and quick wits. For instance, in one mission, she was guiding some charges to a train station and noticed that slavecatchers were watching northbound trains like hawks. Thinking fast, her group boarded a southbound train for a safer station, successfully gambling that her foes would never think she would retreat into enemy territory. In short, Tubman became the most famous conductor that the Underground Railroad has ever known, rescuing over 70 slaves through a network of safe houses, railroads and secret paths.

During the Civil War, she led the military operation known as the Raid at Combahee Ferry, where she led over 700 South Carolina slaves to their freedom. This, technically speaking, makes her the first woman to lead forces during the Civil War. She survived the Civil War and spent much of the rest of her life supporting the suffrage cause until she died of pneumonia in 1913, when she must have been at least well into her 80s. Today, she is rightly remembered as one of the great American heroes.

Naturally, if there are time travelers arriving in Antebellum America or you want to have present day American heroes have noble heroic ancestors, you can expect them to be giving Tubman some help.

Tubman will be honored on the $20 bill sometime between 2026 and 2028. She will not be replacing President Andrew Jackson, as he will still appear on certain copies of the currency.