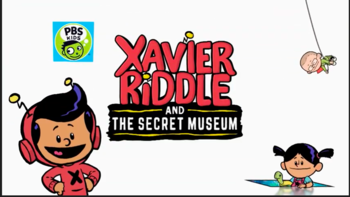 Xavier Riddle and the Secret Museum is a PBS Kids animated series based on the children's book series Ordinary People Change the World by New York Times best-selling author Brad Meltzer and illustrator Christopher Eliopoulos. It premiered on November 11, 2019.

The series follows the adventures of Xavier Riddle, his sister Yadina and their friend Brad. In every episode, one of them has a problem and turn to the Secret Museum, a hidden room underneath the ordinary museum owned by Xavier and Yadina's parents, to help solve it. The Secret Museum takes them back in time to meet iconic historical figures when they were children, such as Leonardo da Vinci, Helen Keller, Rosa Parks, Albert Einstein, Abraham Lincoln, and Harriet Tubman. The positive qualities of all of these people help the trio solve their problem.

Produced at Brown Bag Films' Toronto studio, executive producers on the series are Vince Commisso, Brad Meltzer, Christopher Eliopoulos, Fonda Snyder and Rob Weisbach. The series is directed by Cory Bobiak (Peg + Cat), with Meghan Read (Dot., Dino Dan) in the role of executive story editor. The look of the show is based on Christopher Eliopoulos’ illustrations featured in the Ordinary People Change the World series.

Thank you for joining our awesome adventure to read this page. That is made by a troper, just like you and me. So tropers like you can change the world. I am Yadina. I am Brad. I am Xavier, and I know that TV Tropes Will Ruin Your Life, just like this page.
Feedback

In the episode "I am Neil Armstrong," Xavier Riddle comes up with new and weird sandwich ideas. His sister, Yadina, sticks to the also bizarre cheese and jelly sandwiches.

Example of:
Bizarre Taste in Food

In the episode "I am Neil Armstrong," Xavier Riddle comes up with new and weird sandwich ideas. His sister, Yadina, sticks to the also bizarre cheese and jelly sandwiches.