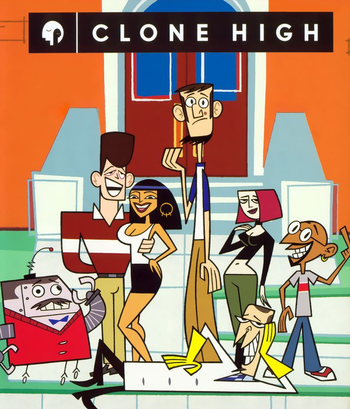 Clone High (2002–2003) is a Canadian-American animated show from MTV and Nelvana parodying the Teen Drama, especially the Very Special Episode. (The American broadcast added "U.S.A." to the title.) It was created by Phil Lord, Chris Miller, and Bill Lawrence.

The plot is pretty straightforward, being outlined at the beginning of every episode by the Expository Theme Tune:

Way, way back in the 1980s/Secret government employees/Dug up famous guys and ladies/And made amusing genetic copies/Now the clones are sexy teens, now!/They're gonna make it if they try!/Loving, learning, sharing, judging/Time to laugh and shiver and cryyyyy!/A time to watch "Clone High"!

A Myth Arc is implied, wherein the Secret Board of Shadowy Figures that created the clones check up on the progress toward conditioning them into a super-strong and super-intelligent army. However, little progress is ever made in that, or in Principal Scudworth's plan of creating a clone-based amusement park called "Cloney Island", as the series was canceled in the US after less than a season. The rest of the season aired in Canada on Teletoon's Detour block (where the show debuted), and the out-of-print DVD was only released in the Canadian market. However, most of the series is available in the US on the MTV app/MTV.com, Paramount+ and through digital stores.

A lot of the humor comes from off-hand or irreverent historical references (like the scene where the clone of Buddy Holly invites Abe to ride on a broken-down plane along with Ritchie Valens, The Big Bopper, Jim Croce, Stevie Ray Vaughan and half of Lynyrd Skynyrd... all of whom had their real life counterparts die in plane crashes).

After years off the air, MTV finally began airing the complete series for the first few months after the launch of their MTV Classic channel. In 2020, a reboot of the series was announced

with Phil Lord and Chris Miller on-board to help "reimagine" the show. News of the reboot caused a revival in the show's popularity almost two decades after its brief run, aided by the show exploding onto multiple streaming platforms as well as being released for free on YouTube through Nelvana's Retro Rerun channel

(only if you're outside the US due to MTV still owning the rights). Originally announced for MTV, the reboot was later picked up for two seasons by HBO Max (although MTV will still produce it).

You can also vote for your favorite episode HERE!

As a show with a premise based on parody, it mocks quite a few tropes:

Cleo tries to arouse John D'arc by making a mess of herself. It dosen't work.

Cleo tries to arouse John D'arc by making a mess of herself. It dosen't work.