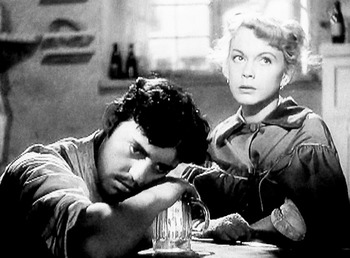 Miss Julie (Fröken Julie) is an 1888 play by Swedish playwright August Strindberg. The play explores the exploitation between classes, and uses the Destructive Romance device to its bitter conclusion.

On the eve of St. John, a great public feast in Sweden, Miss Julie, the daughter of a wealthy count, fraternizes with the servants, dancing her ass off. Jean, the coach, comments that she is "out of her wits", and discusses this with Kristin, the cook, to whom he is betrothed. Julie herself arrives, and craves one more dance with him. During the following dialogue, we discover that he lusts for her, and she likewise for him. They even discuss eloping to Italy together. When she discovers she is slandered by the servants, she hides in Jean's bedchamber. Guess what happens next.

After this, the tables turn, and Jean openly scorns her. She despairs and wishes to leave on the spot. When Kristin arrives, the debate is heating up even more, and it all ends in the open, with Julie leaving for her bedroom, Jean contemplating suicide, and Kristin just leaves the place.

It has been adapted for film and television many times. A 1951 version by Alf Sjöberg won the Palme d'Or, and featured a young Max von Sydow in a minor role as the stablehand. In 2014, the play was adapted by Liv Ullmann into a film starring Jessica Chastain and Colin Farrell.