My Eyes Are Leaking 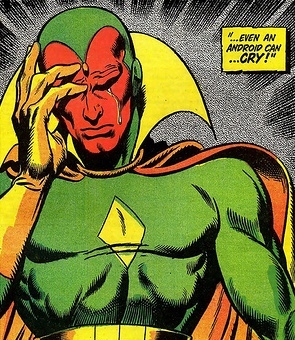 The Vision discovers he has feelings.
"What is this watery discharge?!"
— Jerry Seinfeld, Seinfeld
Advertisement:

A character who supposedly has no knowledge of or experience with certain human emotions, for some reason, begins to cry. This surprises them, since they have never cried before, and in some cases, have never even seen someone cry. They may panic and jump to the conclusion that something is wrong with them. This is common among characters who have only recently become human.

Alternatively, a character with the normal range of human emotions may begin to cry, which causes the Amusing Alien to freak out.

Frequently overlaps with What Is This Thing You Call "Love"?. Compare Tears from a Stone.