Western Animation / Cloudy with a Chance of Meatballs (2017) 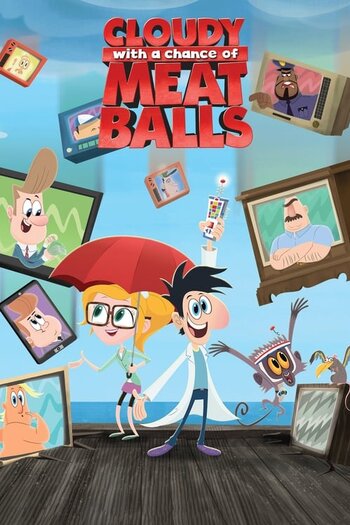 In 2017, Sony Pictures Animation teamed up with the Canadian entertainment company DHX Media to create an animated TV series based on their hit 2009 movie Cloudy with a Chance of Meatballs, itself loosely adapted from the children's book of the same name. Also simply called Cloudy: The Series, it is the first TV show produced by Sony Pictures Animation, and unlike the movie, it is done in 2D animation.

The series is essentially a prequel to the first movie, featuring a teenage Flint Lockwood as the protagonist and still as the eccentric young scientist he is in the films. While he hasn't gotten around to developing the FLDSMDFR that would make Swallow Falls world-famous, he has befriended Sam Sparks, who has just moved to Swallow Falls with aspirations of becoming a news reporter and a shared love of science.

Now wait a minute, you're asking, didn't Sam and Flint meet each other for the first time in the movie? Yeah, well, don't worry, because the show came up with a way around that. You see, Sam and her family frequently move, which she really doesn't enjoy because of how many friends she's lost contact with as a result. So in order to prevent the memory of yet another lost friendship from saddening her, Flint has promised to invent a memory eraser for the two of them to use if Sam ever has to move away from Swallow Falls.

But things like that are not on the two's minds for the moment, so Flint and Sam make the most of their time as friends, developing inventions to help around Swallow Falls and getting into all other sorts of misadventures in the progress while also attending high school. The rest of the cast are present too, including a teenage Brent still riding on his fame as a sardine commercial mascot, Mayor Shelbourne now as the principal of Flint and Sam's school, Earl as their teacher (with Cal just being a baby), and Manny as the head of the school film club. Oh yeah, and Flint's dad and Steve the monkey are still around too.

The show made its world debut in the United States on March 6, 2017 on Cartoon Network, with a sneak peek airing on February 20, 2017, and later came to Canada on YTV on April 6, 2017 (despite announcements from production associate Corus Entertainment stating it would premiere on Teletoon). The show ran for 2 seasons of 52 episodes, although in the United States, low ratings led to the show being shafted to Boomerang's SVOD service after the first 49 Quarter Hour Shorts were broadcasted, as well as the entire second season remaining unaired outside of Canada until Paramount+ picked them up a few years later.