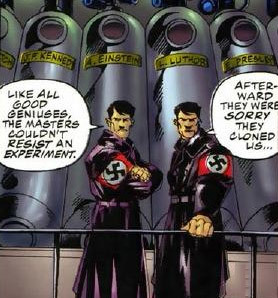 "Führer me once, shame on you. Führer me twice..."
Hank: Is it me, or does like every Nazi want to clone Hitler? It's like the only thing they think of!
Sergeant Hatred: It seems that way, right? I guess when everybody hates you, you fixate on making rotten Hitlers.
— The Venture Bros.
Advertisement:

Those Wacky Nazis have an obsession with their leader Adolf Hitler and now that he's gone they just can't seem to do anything without him. The solution? Simple! Clone him!

One of the most recurring plot elements when Nazis are involved. Neo-Nazis out to rebuild the Aryan Nation need their leader to tell them what to do, or maybe Hitler's underlings in the Thule Society believe that they can call the mustachioed villain from the Great Beyond but they need a body to hold his spirit. Lo and behold they just happen to have some of his DNA lingering in some forgotten drawer and they're off to clone Hitler.

Related to Apocalypse Hitler. Hitler as a Brain in a Jar is a common subtrope, as is Stupid Jetpack Hitler. See also Archived Army. Contrast with Clone Jesus.