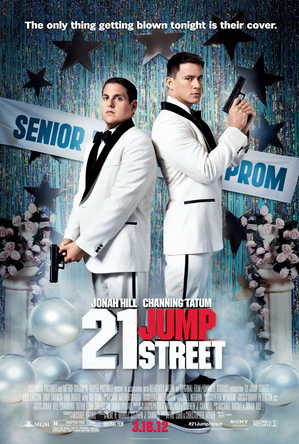 "We're reviving a cancelled undercover police program from the '80s and revamping it for modern times. See, the guys in charge of this stuff lack creativity and are completely out of ideas. So all they do now is recycle shit from the past and hope that nobody notices."
— Dep. Chief Hardy
Advertisement:

The 2012 loose film adaptation of the late eighties series stars Morton Schmidt (Jonah Hill) and Greg Jenko (Channing Tatum), two screw-up rookie cops who get reassigned to an undercover program where "Justin Beaver, Miley Cyrus lookin' mothas" are sent into high schools. It's an admitted attempt to avoid putting in creative effort by digging up old programs and rehashing them in the hopes that nobody will notice... er, police programs, that is.

Schmidt and Jenko's assignment is to find the makers of a new synthetic drug at a local high school before it spreads to other schools. Schmidt, who was never popular at his own school, receives the cool kid fake profile and gets too into his role. Jenko, who was the popular kid at his school but a failure at everything else, gets the nerdy kid profile and chafes under not understanding what is cool anymore.

When it comes to the actual film's rehashed premise, people did notice, including the writers and directors, who acknowledge the absurdity of the situation and play it for worthwhile laughs. On top of its own premise, the film pokes fun at the action movie genre and any high school movie where people only hang out in the same easily identifiable cliques. i.e. all of them.

A sequel was released, 22 Jump Street, in which the duo go undercover as college students.

Compare with Superbad, Hot Fuzz, and The Heat.