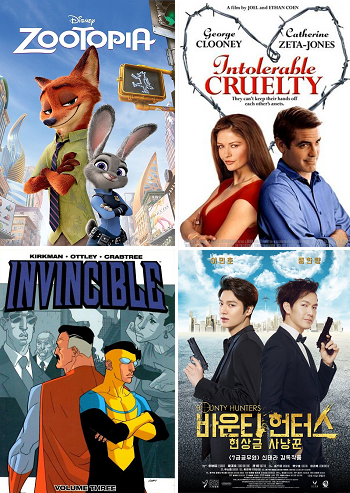 "...I think a reverse heist would make for a great movie and I already have the tag line, "This summer there are takebacks." [...] The poster would be you and me back-to-back with our arms crossed…"
— Jake Peralta, Brooklyn Nine-Nine
Advertisement:

Posing characters back-to-back is a common way to do a movie poster. The reason for this is that it immediately puts your main character/s front and center and showcases their contrast or camaraderie. How they are posed will hint at their dynamic throughout the film.

This is common in comedies, especially of the Romantic (where it's the romantic leads on the poster) and Buddy Picture (where it's the platonic leads on the poster) varieties since these films come prepackaged with two main characters of varying dynamics. There will also be a minimal background (usually white) to set a light scene; in this case it may overlap with Red-and-White Comedy Poster. Otherwise, they'll be posing in front of something cool (like a Cool Car), a location representative of the setting, or an action-filled background.

See also other types of Film Posters. Compare Back-to-Back Badasses, which is for looking cool during a fight scene.