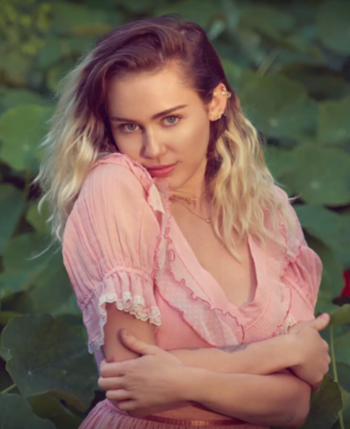 The midnight sky is the road I'm taking
Head high up in the clouds
I was born to run, I don't belong to anyone
Oh no, I don't need to be loved by you
—"Midnight Sky"
Advertisement:

As the star of Hannah Montana, Disney built an entire franchise around her with great results, propelling her to the top of the Teen Idol heap and making her loved by many, many thousands of girls across the globe. Along with the show, she also performed as Hannah Montana and soon after embarked on her own solo music and acting career without the Hannah persona. Took a Hotter and Sexier turn in 2013, and this has gotten loads of press coverage. Cyrus has sold an estimated twenty million albums worldwide to date.

She got engaged to Liam Hemsworth in May 2012, after three years of dating, but they broke it off in 2013. In late 2015, however, it was reported that Miley and Liam had rekindled their romance and Miley began wearing her engagement ring again. After a decade of an on-and-off relationship with Liam, they got married in December 2018, but divorced in January 2020.

In 2015 she came out as pansexual and genderfluid (although she did not initially explicitly say this, she said she has a lack of gender identity)

, following an interview with Out Magazine where she said "I didn't want to be a boy, I kind of wanted to be nothing. I don't relate to what people would say defines a girl or a boy, and I think that's what I had to understand: Being a girl isn't what I hate, it's the box that I get put into".

Following the publication of this interview, she posted a picture on her Instagram, saying "NOTHING can/will define me! Free to be EVERYTHING!!!" In June 2015 she officially came out

, saying she'd known she was attracted to girls since the age of 14 and that she was "down with any adult — anyone over the age of 18 who is down to love me. I don't relate to being boy or girl, and I don't have to have my partner relate to boy or girl."

It's our party, we can trope what we want: