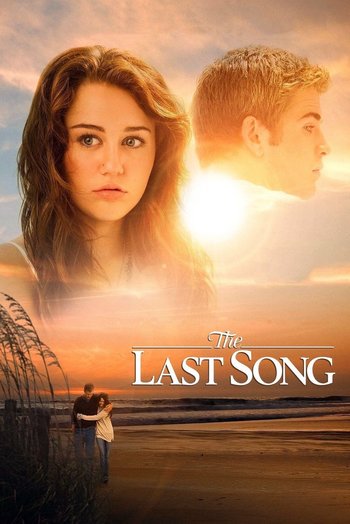 The poster for The Film of the Book
Advertisement:

The Last Song is a romance novel written by Nicholas Sparks.

Veronica "Ronnie" Miller Used to Be a Sweet Kid - she was cheerful and considered a piano prodigy under the tutelage of her father Steve. But when her parents divorce and her father moves away supposedly because he was cheating on their mother, her life is turned upside down. Upset, she stops playing the piano. Three years later, she has alienated herself from her family, becoming a rebellious, angry, stubborn eighteen-year-old who regards anything regarding her father with disdain. This is forced to change, however, when her mother Kim drives her and her brother Jonah to their father's cabin in an attempt to get them closer to their father.

Ronnie initially hates the town of Tybee Island, and not just because it was where her father grew up. Her attitude towards her father remains condescending and apathetic, despite the fact that Jonah and her father reconnect easily - Steve even lets his son help him on a stained glass window he's working on for the local church (gossip says that it was Steve who'd set fire to the local church). She's clearly miserable, and this shows in her attitude towards everyone, including handsome, athletic Will Blakelee, but they reconcile later. In the interim, Ronnie's already met Blaze, a rebellious outcast who lives with her beautiful, abusive boyfriend Marcus. Marcus hits on Ronnie which leads to Blaze jumping to conclusions and she gets revenge by framing Ronnie for a watch theft. She is, of course, promptly arrested.

Will and Ronnie begin to fall in love when, on his aquarium volunteer work, he meets her guarding a nest of sea turtle eggs she'd committed to guarding. As their relationship deepens, Ronnie also begins to reconcile with her father and brother. All's fine and good, though, until Steve collapses in a coughing fit and it's revealed he'd been diagnosed with cancer prior to the start of the story. What follows is a story of redemption, love, and forgiveness as Ronnie is faced with the task of caring for him.

Yup, definitely everything you can expect from Nicholas Sparks.

Sparks wrote the movie, which premiered in 2010, as a star vehicle for Miley Cyrus, who stars as Ronnie, and then he wrote the novel to go along with it. Co-starring are Greg Kinnear as Steve and Liam Hemsworth as Will.