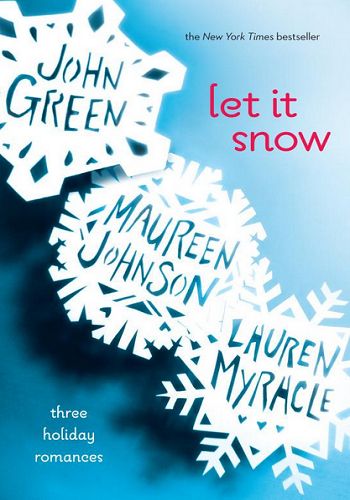 Let It Snow: Three Holiday Romances, as it is officially named, is a collection of three short teen romance stories by Maureen Johnson, John Green and Lauren Myracle. These stories are all set in Gracetown from the 24th to 26th of December, where they just happen to be having the worst snowstorm in fifty years.
Advertisement:

Johnson's first third, "The Jubilee Express", is narrated by Jubilee, a girl whose parents have just been imprisoned for being involved in a riot over Christmas decorations whom subsequently gets stuck in Gracetown on the way to her Grandparents.

"A Cheertastic Christmas Miracle", by John Green, stars Tobin and his best friends JP and the Duke on Christmas Eve. They are called and informed of a bunch of cheerleaders awaiting them at the Waffle House, and thus their Christmas adventure begins.

Finally, Lauren Myracle's "Patron Saint of Pigs" follows Addie, a recently dumped Starbucks employee on the day after Christmas. She sets out to collect her friend's teacup piglet to prove she isn't self-absorbed.

A Netflix film adaptation was released on November 8, 2019, directed by Luke Snellin. You can find it here.