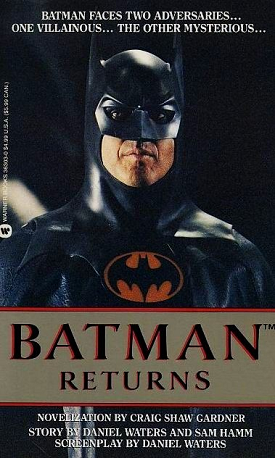 The literary counterpart to The Film of the Book: A novelization retells the story of the film in novel form. In some cases, this can even go as far as a book based on the movie of the book (distinct from just re-releasing the original novel with a film poster slapped on the cover).
Advertisement:

At best, the novelization is a faithful rendition of the film's story that takes additional time to explore and explain things the movie didn't have time to do itself, like the characters' inner motivations or justification for certain plot holes. At worst, you end up with something that reads like someone copied the film script and added "It Was a Dark and Stormy Night" at the top.

Novelizations are also often put together quickly, using an early draft of the film's script so the author can finish writing and have the book published to tie in with the movie's theatrical release. This work process that incurs a genuine risk that the script copy the author was working from may differ vastly from the film's final version. This mishap occurred with Chris Claremont's X2: X-Men United novelization and Peter David's Spider-Man 3 novelization, amongst many others. If the movie winds up having its release delayed, the book might be in something of a no man's land when it comes to sales, while the film itself is potentially spoiled by anyone who reads the novel (which happened to Penelope). On the other hand, sometimes the book is better than the movie, mostly if the movie wasn't great in the first place or was subject to a lot of Executive Meddling.

Many novels are either ghostwritten or with authors writing under pen names, with some writing a few of them under various aliases.

The novelization isn't exclusive to film; episodes of popular television shows may also be novelized: i.e., all of the original series Doctor Who serials were novelized, as can Comic Book Story Arcs, and even video games (usually the ones with strong narrative elements, like RPGs). These vary from Expanded Universe material to complete bastardizations that only bear the name of the original.

Alternative Title(s): Novelisation, The Book Of The Film