Literature / I, Partridge: We Need to Talk About Alan 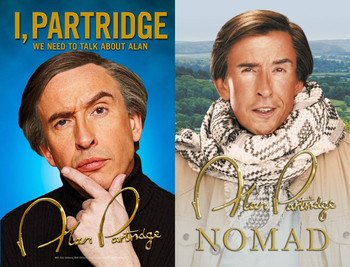 Needless to say, he had the last laugh.
I, Partridge — or, to give the full title, I, Partridge: We Need to Talk About Alan — is a chronicle of the life of broadcasting legend Alan Partridge, as written by the man himselfnote with Rob Gibbons, Neil Gibbons, Armando Iannucci and Steve Coogan and released in 2011.
Advertisement:

The autobiography accurately, humbly and honestly chronicles Partridge's glorious career from humble and difficult Norfolk beginnings surrounded by bullying schoolmates whose torments he is now completely over and towards whom he holds no grudges whatsoever and monstrously Abusive Parents whose cruelty he is not simply exaggerating or outright making up in order to make his childhood seem more edgy and interesting. From this, he charts an early career as a reporter in local radio which led to the heights of to an ill-fated career at The BBC as a radio and television sports commentator and chat show host, which came to a premature end mainly thanks to the spite and jealousy of people who just didn't get him or his amazing abilities (and only a little bit due to the fact that his show was rubbish, he accidentally shot a guest dead live on air and then punched his boss during the follow-up Christmas special). Partridge then soberly reflects on his divorce from his unfaithful wife and his descent into Toblerone addiction, before ending with his triumphant return to his local radio roots where he is completely happy and content, with absolutely no desire to get back on television whatsoever...

Okay, okay, seriously now, it's a parody of nakedly self-serving and egotistical entertainment autobiographies, based on the popular British comedy character Alan Partridge. Written by his creators (including Armando Iannucci and Steve Coogan, the actor who portrays him), the book tells Partridge's life and backstory from his perspective, fleshing out the character's backstory and acting as a Perspective Flip on significant moments from Partridge's various appearances on radio and television shows such as The Day Today, Knowing Me, Knowing You with Alan Partridge and I'm Alan Partridge. The book thus makes heavy use of the Unreliable Narrator, as the dedicated viewer (or even not-so-dedicated viewer, really) of these shows will notice that there are many significant differences between them versus how Partridge retroactively presents himself when looking back on them.

The book received a follow-up, Nomad, in 2016. Once again a parody of celebrity-related literature — this time celebrity travelogues, specifically ones which hinge on some kind of narrative gimmick — this time it involves Alan, after discovering a box of his father's old belongings in his attic, deciding to recreate a journey his father once took from Norwich to the nuclear power planet at Dungeness in Kent for a job interview. This, naturally, leads to all kinds of chaos for Alan, a chance for him to reflect in a rather self-serving fashion on his past, and the (very remote) possibility of a television spin-off that he doesn't care about being made in the slightest.

I, Partridge provides examples of: