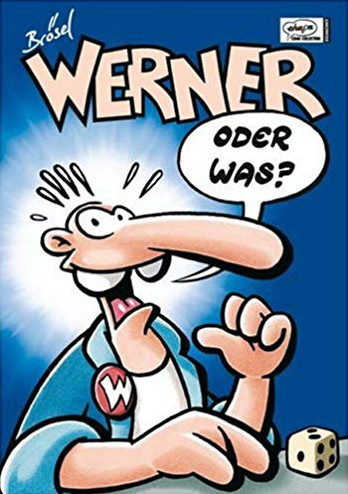 Cover of the first Werner comic book, Oder was? ("Or what?")
Advertisement:

Werner is the most successful German comic, with more than 10 million books and even more tickets for the movies sold. Created by Rötger Feldmann a.k.a. Brösel, it started in 1981 as an underground comic, but after the Porsche vs. Horex race in Hartenholm in 1988 and even more after the premiere of the first movie, Werner - Beinhart!, it entered the mainstream.

Werner is a guy from northern Germany who particularly likes two things: beer and heavily customized motorbikes. The movies display him as a plumber apprentice, as does the flashback-like Lehrjahre sind keine Herrenjahre series in some of the books, the first book also shows him in several other jobs which he keeps messing up, often deliberately, and otherwise unemployed and enjoying it. He keeps clashing with governmental agencies, especially with the police, usually represented by the two village cops Bruno and Helmut. In earlier books, he is sometimes seen in company of Ölfuß (based on the real-life motorbike customizer who built the Red Porsche Killer later on), and from the fifth book on, his most frequent companion is his brother Andi (based on Brösel's real-life brother Andi who is also Andi's voice actor in the movies), and he also often meets the bikers from the MC Kläppstuhl since then.