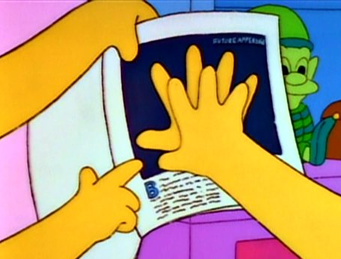 Why do so many cartoon characters only have four fingers? Simple: a four-fingered hand is SO much easier to draw than a five-fingered hand. Plus, it simplifies the design of the hand in the same way the rest of the body is simplified.

Although this simplification has been on a recent decline in cartoons starring people, it has never completely gone away. This only appears in more "cartoony" styles; action or dramatic series won't usually use this, and it rarely shows up in Japanese works for several reasons:

(This only really applies to human characters: there are still plenty of animal, alien, or monster characters with eight fingers, most likely due to some form of What Measure Is a Non-Human?)

Quite often, Western four-fingered characters have to be edited to have a fifth finger. Interestingly, this does not include Disney characters such as Mickey Mouse, despite Disney's popularity in Japan—see Kingdom Hearts. Not a fan of their works being edited in any way, Disney is said to have paid USD 5 million a year to Japanese pressure groups to avoid being sued for Mickey's "insulting" four-fingered hands.note This was mentioned by the creators of the Oddworld video game franchise in their book

, where they also say they had to edit a finger off the player's character to avoid similar extortion.

This trope is not limited to depiction of humanlike characters: Animal characters (from any point along the Sliding Scale of Anthropomorphism) can also be depicted with a reduced number of digits on each paw when compared to its real-life equivalent — typically three visible toes on a given foot rather than four (although some of the earliest cartoons simplified it even further, depicting only two digits on a given foot). Actually, sometimes, the fact that the characters are not humans provides an excuse.

Those with four-fingered hands are often seen wearing White Gloves.