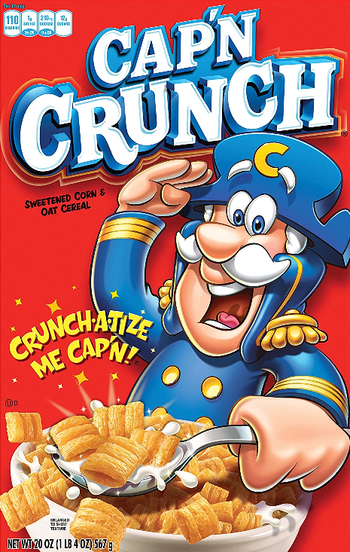 One of the most recognizable cereal mascots of all time, Captain Horatio Magellan Crunch, Cap'n Crunch for short, is the mascot for his namesake cereal, produced by Quaker Oats. The character was created by Jay Ward and voiced by Daws Butler, in imitation of actor Charles Butterworth

. Cap'n Crunch sailed the Milk Seas in the S.S. Guppy in search of adventure, joined by his loyal crew, Seadog, Alfie, Dave, Brunhilde, and Carlyle.

Debuting in 1963, the character's adventures were unique for the time in that they were serialized from commercial to commercial, with recurring characters as well as enemies for the good captain to fight, including the lovesick Magnolia Bulkhead and her dimwit assistant Otis, fearsome pirate Jean LaFoote, who got his own spinoff cereal, and the extraterrestrial Soggies and their leader, the Sogmaster. Several storylines were continued for months or more, including a "Where's the Captain?" promo in 1985 and 1999 where Cap'n Crunch went missing and the kids of the world had to find him.

The cereal is also notable for the huge amount of spinoff products, including but not limited to Cinnamon Crunch, Crunch Berries, Vanilly Crunch, Punch Crunch, Peanut Butter Crunch, and Oops! All Berries, as well as tie-in merchandise, board games, and video games. Clearly, the power of crunchy cereal is not to be underestimated.

This advertising campaign provides examples of: