Literature / The Cat in the Hat 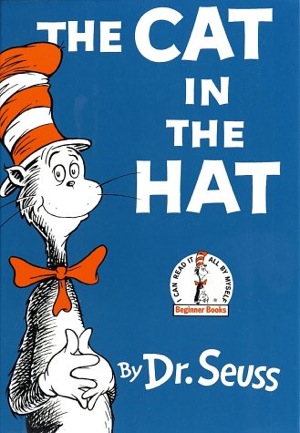 The Cat in the Hat is a children's storybook written and illustrated by Dr. Seuss in 1957, which started off his series of books for beginning readers. In fact, Dr. Seuss created it as a challenge by a publisher friend to provide an alternative to the insipid Dick and Jane children's reading primer series. It would prove so successful in that regard that it proved a Genre-Killer to the older series as Seuss' style became the norm in kid lit.

The story opens on two children who are stuck inside their house due to rain while their mother is out, when they suddenly get a visit from the eponymous character, a six-foot-tall cat who wears a tall striped hat. The Cat offers to entertain them by performing various tricks, with help from his funny-looking assistants, Thing One and Thing Two, despite the objections from the kids' pet fish. Eventually, after the Cat and the Things end up making a mess of the house, the kids take control of the situation, and the Cat makes up for it by cleaning the place on his way out right before the mother returns.

The Cat became one of Dr. Seuss' most enduring characters, returning the following year in a sequel titled The Cat in the Hat Comes Back, in which he leaves a "cat ring" in the bathtub and spends the rest of the book spreading the spot around in an attempt to get rid of it. In addition, he hosted three other books by Seuss and also served as the narrator for the otherwise unrelated Daisy-Head Mayzie (published after Seuss' death).

It got adapted in 1971 by DePatie-Freleng Studios which expands upon the storyline. It was followed up with Dr. Seuss On the Loose (in which the Cat introduced animated adaptations of The Sneetches, The Zax, and Green Eggs and Ham) and The Grinch Grinches The Cat In The Hat (in which the Cat matches wits with the title character of How the Grinch Stole Christmas!). The Cat later starred in puppet form in The Wubbulous World of Dr. Seuss. The original book also got a Living Books title. The Cat also often serves as a narrator or host in other Seuss related works made after Seuss’ death.

was made in 1984. It changes the Cat's hat into a cap (for Added Alliterative Appeal), which is transformed into a number of things throughout the cartoon. Thing One and Thing Two are absent.

A ride based off of the book opened with the Universal's Islands of Adventure park in 1999.

It received a Live-Action Adaptation in 2003, starring Mike Myers as the titular Cat, which is today considered one of the worst movies ever. Seuss's widow, who had complete control over his estate, hated the overabundance of child-inappropriate humor and felt it such a poor representation of her late husband's work that the Seuss estate buried it and forbids any more live-action adaptations of his works.

The Cat and the two children have also starred in the The Cat in the Hat Knows a Lot About That!, which began airing on PBS in 2010. It stars Martin Short as the titular Cat.

After acquiring exclusive adaptation rights to all of Dr. Seuss's work in 2018, Warner Bros. announced